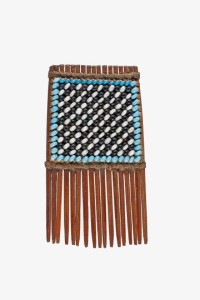 The University of Cambridge is staging a mayor exhibition exploring the 6,000-year history of the afro comb and the politics of black hair.

The fascinating display charts the inception of the comb in Ancient Egypt through to its ascendancy as a political emblem post-1960s.

“What we know from the early hair combs is they were connected to status, group affiliation, cultural and religious beliefs,” says curator Sally-Ann Ashton. “In more recent times, the ‘black fist’ comb that references the black power salute has wider political connotations.”

The material is being showcased at 2 university sites: The Fitzwilliam Museum, and alongside life-size installations created by artist Dr. Michael McMillan at the Museum of Archaeology and Anthropology (MAA).

Items on display at Fitzwilliam include hundreds of combs from pre-dynastic Egypt to contemporary picks. Some interesting artifacts include a 5,500-year-old comb from Southern Egypt and the original black fist comb, which was patented in 1976 in America.

The idea behind the exhibition was to take a fresh look at Egyptology within the parameters Africa in all its diversity, rich heritage, and culture, says Ashton. Interestingly, she says the earliest combs in the collection are from Egypt and this alongside her scholarly research has left her with no doubt that ancient Egyptians were racially and culturally black African.

“People do not want to admit or believe that these early civilizations were non-European but they were,” says Ashton.

Associated material includes paintings, sculpture and images showing the variety and complexity of hair styles found in Africa and on the Diaspora.

A digital interactive gallery also showcases projections of personal accounts about combs and African-type hair. Visitors are encouraged to share their own stories and photos, which will become part of archive material for future generations.

At the smaller MAA are the contemporary 3D-art installations that bring to life the cottage salon in the home, the barber shop and hairdressing salon in the modern day era. This is complemented by interactive works which center on the culture, styling and politics of afro-textured hair.

It’s about choice,” says Sandra Gittens, author of African-Caribbean Hairdressing, who was involved in the exhibition in an advisory role. “People make a choice how to wear their hair.”