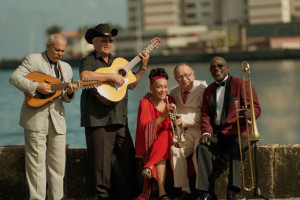 When Cuban guitarist Eliades Ochoa convened with a group of seasoned Cuban musicians and American guitarist Ry Cooder to record an album of Cuban son music for the World Circuit record label, he couldn’t have imagined that the project would become an international sensation that would endure for more than a decade.

But since its release in 1997, Buena Vista Social Club has grown into a bona fide cultural phenomenon. Hailed as the first internationally best-selling album of Cuban music — and one of the best-selling world music albums of all time — it has sold more than 8 million copies and spawned a number of offshoot solo albums and the Afro-Cuban All-Stars side project. Although the original lineup only performed two concerts together, a new configuration known as Orquesta Buena Vista Social Club, featuring several surviving members of the original collective, is in the midst of a month-long U.S. tour.

“It’s almost addictive,” Ochoa says through an interpreter. “People respond to the music on so many levels.”

Ochoa, who’s been called “Cuba’s Johnny Cash” due to his dark jeans, cowboy boots, and status as a champion of his country’s traditional music, was one of the younger of the Buena Vista musicians, none of whom were particularly well known outside their native country when they got together. Likewise, son — a fusion of Spanish guitar and African percussion and rhythm, with roots stretching back to the early 20th century — was hardly in fashion at the time, especially in Cuba.

Both of those facts changed with the release of the album (and the 1999 Wim Wenders film of the same name, which garnered an Academy Award nomination for Best Documentary Feature). In the wake of the album’s success, son experienced a resurgence in Cuba, as musicians scrambled to play the now-popular style for eager tourists.

In the states, the album danced its way to the top of the Billboard World Music, Latin Albums, and Tropical Albums charts, and made it to No. 80 on the magazine’s Top 200 chart. By the time Cooder took home a Grammy Award for Best Tropical Latin Performance, the Buena Vista Social Club (named for a popular Cuban music club from the ’40s) had established itself as a brand — one that “has come to represent Cuban roots all around the world,” says Ochoa.

That worldwide popularity can be attributed to the label’s canny decision to market Buena Vista Social Club to fans of world music — a group that author and musician David Garlitz, in his book Tourist Songs: Cultural Tourism, The Buena Vista Social Club, and The Cuban Son, describes, not unkindly, as “middle-class white consumers” with “no previous knowledge of Cuban music” — at the expense of the Latin market in the United States and elsewhere, a demographic to whom Cuban sounds like son “are old news.”

That strategy certainly reaped dividends stateside. While U.S. familiarity with the music of Cuba had grown a bit thanks to a trio of early ’90s compilations released by David Byrne’s Luaka Bop label, Buena Vista Social Club was promoted as an archeological find, the discovery of a new (to many audiences, at least) and exotic musical form.

That’s not to suggest that the project’s whirlwind success was the result of a cynical cash-grab. Cooder himself has expressed amazement at the album’s remarkable performance. “Find me one reason why this would have been popular; there’s no logic. It’s just that it’s great, and everybody picked up on it,” he told the “Global Village” world music radio show.

And mainstream American audiences are uniquely susceptible to sales pitches that present unfamiliar forms of traditional music as an unexplored frontier (witness the similar reaction to the 2000 soundtrack to the Coen Brothers film O Brother, Where Art Thou?, with its mixture of folksy country, blues, gospel, and bluegrass sounds).

Instead, Ochoa attributes the ongoing popularity of the Buena Vista project to the deep respect he and the other musicians have for the source material. “We do what we do because we love it,” he says. “That love for traditional Cuban music comes through in a way that is bigger than us.”

Ochoa has kept plenty busy in the years since the Buena Vista Social Club album and film, recording on his own and with collaborators, including blues harmonica legend Charlie Musselwhite. In 2010, he recorded an album as part of the group AfroCubism, a cross-cultural foray comprising musicians from Cuba and Mali.

The experience, which Ochoa describes as “so rewarding — a historical milestone marking the brotherhood between Cuban and African music,” was the realization of a long-deferred dream that inadvertently gave birth to the Buena Vista phenomenon: The World Circuit label originally intended to pair Cuban and Malian musicians in Havana in 1996; the project switched gears to what became the Buena Vista sessions only after the Malian musicians couldn’t make it to Havana.

As for the future, Ochoa has no new projects lined up, but he’s open to the idea of another AfroCubism album, and has voiced his support for a modern-day Buena Vista album with the current Orquesta lineup, as well. “There are no firm plans”, he says. “But there’s definitely a desire to do it. So who knows?”

While the future of Orquesta Buena Vista Social Club is uncertain after the current tour wraps up, Ochoa remains confident that the Buena Vista name will continue in some form or another. “It never ends,” he says. “It has become a myth.”