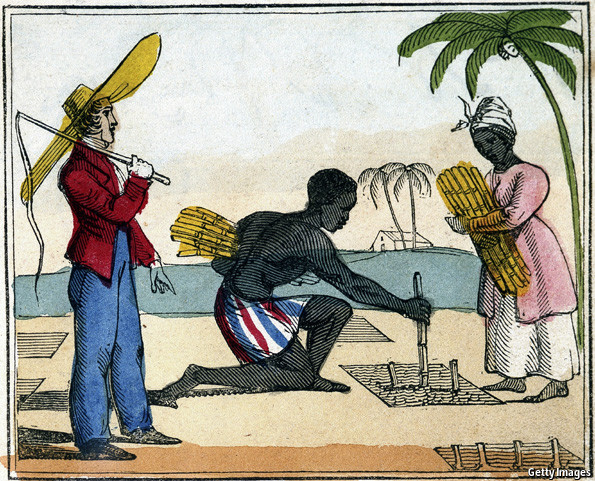 LAST month Rodney Leon, a Haitian-American architect, won a competition for a memorial to victims of the slave trade. His white marble “Ark of Return”, shaped somewhat like a paper boat, will stand outside the UN headquarters in New York. Inside the building, some Caribbean leaders have used their annual General Assembly speaking slots to call for financial compensation for this great wrong. “We have recently seen a number of leaders apologising,” said the prime minister of Antigua and Barbuda, Baldwin Spencer. They should now “match their words with concrete and material benefits”.

Britain ended its slave trade in 1807, and freed the slaves in its Caribbean colonies by 1838. The British government borrowed £20m, then around 40% of the budget, to meet 47,000 claims for loss of human property. The former slaves got nothing.

Close to two centuries on, Caribbean politicians want redress. The Caribbean Community (Caricom) which links former British colonies with Suriname and Haiti, established an official reparations commission in July and has approached a British legal firm, Leigh Day, for advice.

Few of history’s great wrongs have been smoothed over with cash. Attempts to make Germany pay for the first world war simply hastened the second. Ukraine has not sought compensation from Russia for those who died in Stalin’s famines and purges. Among the precedents for financial reparations, West Germany and Israel signed a financial agreement in 1952, seven years on from Auschwitz. In June this year, after legal action by Leigh Day, Britain conceded payments averaging £2,600 ($4,000) each for 5,228 now elderly Kenyans who were brutally mistreated during the suppression of the Mau Mau rebellion in the 1950s. Britain’s courts will not now consider claims for atrocities occurring before 1954. Unpicking wrongs from 60 years ago is hard enough.

Who should pay? With the slave owners all dead, Caricom wants taxpayers’ money from Britain, France and the Netherlands. At emancipation, around 3,000 slave owners lived in Britain; their wealth and their descendants are now scattered over the globe. Liverpool was once a wealthy slave port; the city’s current inhabitants, many of them Afro-Caribbean in origin, hold little of that cash.

How much should be paid? It is impossible to value the pain of those who are long dead, or even the economic damage suffered. Figures quoted for the current equivalent of the £20m paid to slave owners vary from £16.5 billion to £76 billion. A widely reported demand in 1999 was for $777 trillion to be paid to Africa over five years. More than ten years on, that would still be around ten times global GDP. 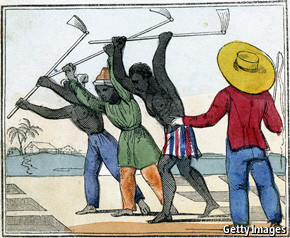 Who should be paid? Caricom is talking about compensation at a national level. Based on the numbers with slave ancestors, that would funnel the lion’s share of the money to America and Brazil—with a good slice to Brixton and Birmingham.

There is potential for divisive squabbles. In Trinidad and Guyana, descendants of Indian indentured labourers outnumber the black population. Sat Maharaj, Trinidad’s most prominent Hindu leader, argues that the Indo-Caribbean population also deserves compensation. He asks whether it should also come from Islamic countries that imported slaves, and from African countries where local merchants sold slaves to Europeans.

Most former slave colonies in the Caribbean are now fairly successful middle-income countries, or better. On a PPP basis, the Bahamas has a GDP per head close to that of Spain or Italy. Barbados scores higher on the UN Development Programme’s human-development index than any of its much larger South American neighbours. Jamaica and Guyana are less prosperous; but only Haiti ranks among the world’s poorest. Any assistance to the region should be carefully targeted; and should surely stem from today’s needs, not the wrongs of the past.