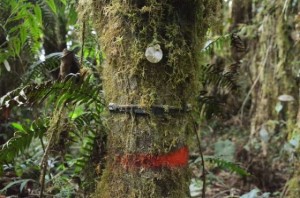 Justin Catanoso (for National Geographic) reports on how tropical plants are migrating due to climate change, asking “but can they move fast enough?”

From a 13,000-foot peak of the Andes Mountains in southern Peru, gazing east over the dense rain forests of the Amazon basin, all you see is undulating green—one of the most verdant places on the planet. It’s what you can’t see that matters. The plants are on the run, trying to move to higher ground, where the air is cool enough to support their existence.

“Most of these species are not going to be able to tolerate climate change,” says Ken Feeley, a tropical biologist from Florida International University in Miami, “mostly because climate change is happening so fast.” Feeley spoke as we hiked into the jungle with a small group of other scientists—through an area that contains more tree, plant, bird, and animal species than the entire eastern seaboard of the United States. It is here that an international collective of scientists, called the Andes Biodiversity and Ecosystem Research Group, has mapped one of the largest field grids of its kind for a wide range of climate change studies. According to a decade of research by Feeley and his colleagues, including tropical biologist Miles Silman of Wake Forest University, tropical species are frantically migrating upslope as they reproduce. But they may not be moving fast enough.

Tropical Andean tree species are shifting roughly 8 to 12 vertical feet (2.5 to 3.5 meters) a year on average—the arboreal equivalent of a dash. Yet for those trees to remain in equilibrium with their preferred temperatures, they need to migrate more than 20 vertical feet a year.

[. . .] As we hike, I notice a large, bushy schefflera with umbrella-like leaves. It looks just like the one I have in a pot on my porch back home in North Carolina. Silman says it could survive the race. Of 38 species tracked in the 2010 study, schefflera is migrating the fastest, as much as a hundred vertical feet a year. But ficus, another common houseplant native to the tropics, could be doomed. It is migrating less than five vertical feet annually.

Research models by other biologists project that more than 50 percent of tropical species could die off by 2100 or sooner if average temperatures rise by 7 degrees Fahrenheit, as climate experts predict. If the planet warms even more, which is possible, extinctions could reach 90 percent.

[Justin Catanoso is a journalist in North Carolina. His climate change coverage is supported by the Pulitzer Center on Crisis Reporting in Washington, D.C.]